We’ve biked 402 miles on our Pandemic Ride.  If we were out west as planned, we’d be in De Borgia, Montana, in our 41st state. 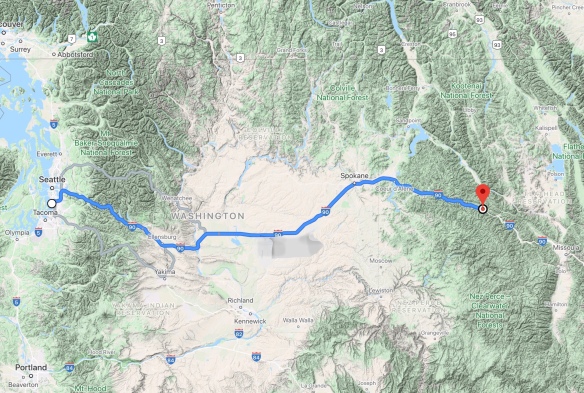 Alas, the Pandemic has confined us to the Northeast.

“The [Hudson River] originates in the Adirondack Mountains [and] drains into the Atlantic Ocean at New York Harbor.”

Recently we circled the southernmost stretch of that Hudson drain, between the George Washington Bridge (“GWB”) and Staten Island.

Now we have circled it again, toward the north.

We passed the Little Red Lighthouse (see Joey on the fence), continued through The Bronx and Yonkers and pretty towns, crossed the new Tappan Zee Bridge on its blue cycling path, and went home over the GWB. 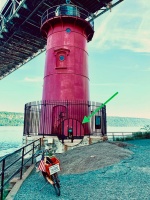 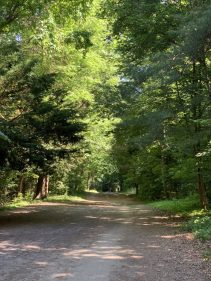 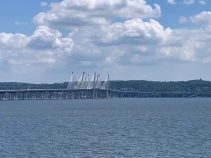 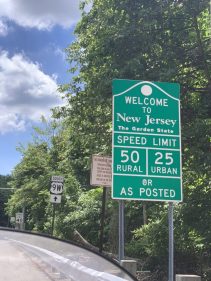 People showed support for human rights along the way.  Many cyclist racers passed us, calling out encouragement, giving thumbs-ups, flashing the friendly Hawaiian “shaka” sign.  A few people stopped to talk, among them a family from Cresskill, NJ.

April (holding our card), David, and their kids (puppy not shown) flagged us down to ask about the Ride.

Circling this part of the Hudson drain was a 54 mile journey.

All of America is circling a drain too.

I’m not referring to the pandemic.  Mismanagement and ignorance have killed at least 130,000 Americans, and will kill tens or hundreds of thousands more.  It’s painful, but our country will survive it.

I’m not referring to the persecution of Americans whose skin tone, religion, gender expression, or affectional preference doesn’t conform to certain stereotypes.  The recent public outcry suggests that our country can survive it.

I refer to the ongoing destruction of the fundamental American principle that all people have an inalienable right to life and liberty.  The administration is gutting that principle by effectively outlawing asylum for the persecuted.  If our country guts the Refugee Act of 1980, America as we know it will not survive.

Previously we wrote of our government’s illegal exclusion and expulsion of people who long were protected under laws established by Congress, signed by the President, and interpreted by the courts.

Now, the few refugees who might still be eligible to request asylum, will be denied permission to work for at least a full year while their cases are pending.  Additional rules will prevent almost all of them from working even after a year goes by.  They are not eligible for federal benefits.  They will have no means of self-support while they exercise their legal right to ask for refuge.  Human Rights First explains the details here.

On page 213 of its final rule, DHS dumps its humanitarian disaster onto the states:

“Asylum seekers who are concerned about homelessness during the pendency of their employment authorization waiting period should become familiar with the homelessness resources [if any] provided by the state where they intend to reside.”

What can we do about this destruction of what makes America, America?

I have won asylum for hundreds of refugees since 1983.  I can work within a system that, under the Refugee Act, protects people who have a well-founded fear of persecution on account of race, religion, nationality, social group membership, or political opinion.

But now the Refugee Act is drowning in illegal regulations.  If I plunge into this sewer, I will be out of my depth.  I can’t fight so many powerful currents.  I too would drown.

It has the knowledge, staff, and connections to fight executive branch lawlessness on the necessary scale.

Hardy is a fellow Duke University alumnus.  Unlike me, he’s young—and impressive.  After a judicial clerkship and distinguished work for the military, for the private sector, and for Save the Children International, Hardy manages refugee representation at Human Rights First.

This spring, Hardy led his team in two federal lawsuits to obtain the release of immigrants at high risk of contracting coronavirus who were “detained” (jailed) in Los Angeles and New Jersey.  Now he tells me he and the Human Rights First team “are focused on pushing back on the administration’s recently proposed asylum regulations, which seek to end access to asylum for the vast majority who come to our country for protection.“

Our country needs Hardy’s service.  Let’s help him and his team to save America, the real America, the humane and just America, from going down the drain.

Please tell your neighbors what’s happening to our country.

Together we can help Hardy, so maybe he can stop it.

Donate to support Human Rights First and their work to protect and project America's values.

BONUS: Donors to HRF get a

–
“Don’t forget: Jeffrey and I speak for ourselves, not for Human Rights First.” —Joey

Miles pedaled in NYC & environs: 503 . . . which would have taken us from Seattle to Florence, Montana.

Days until departure from Seattle: Please Stand By!
Miles Pedaled Out West: 0

NYC to Seattle to the mountains . . . 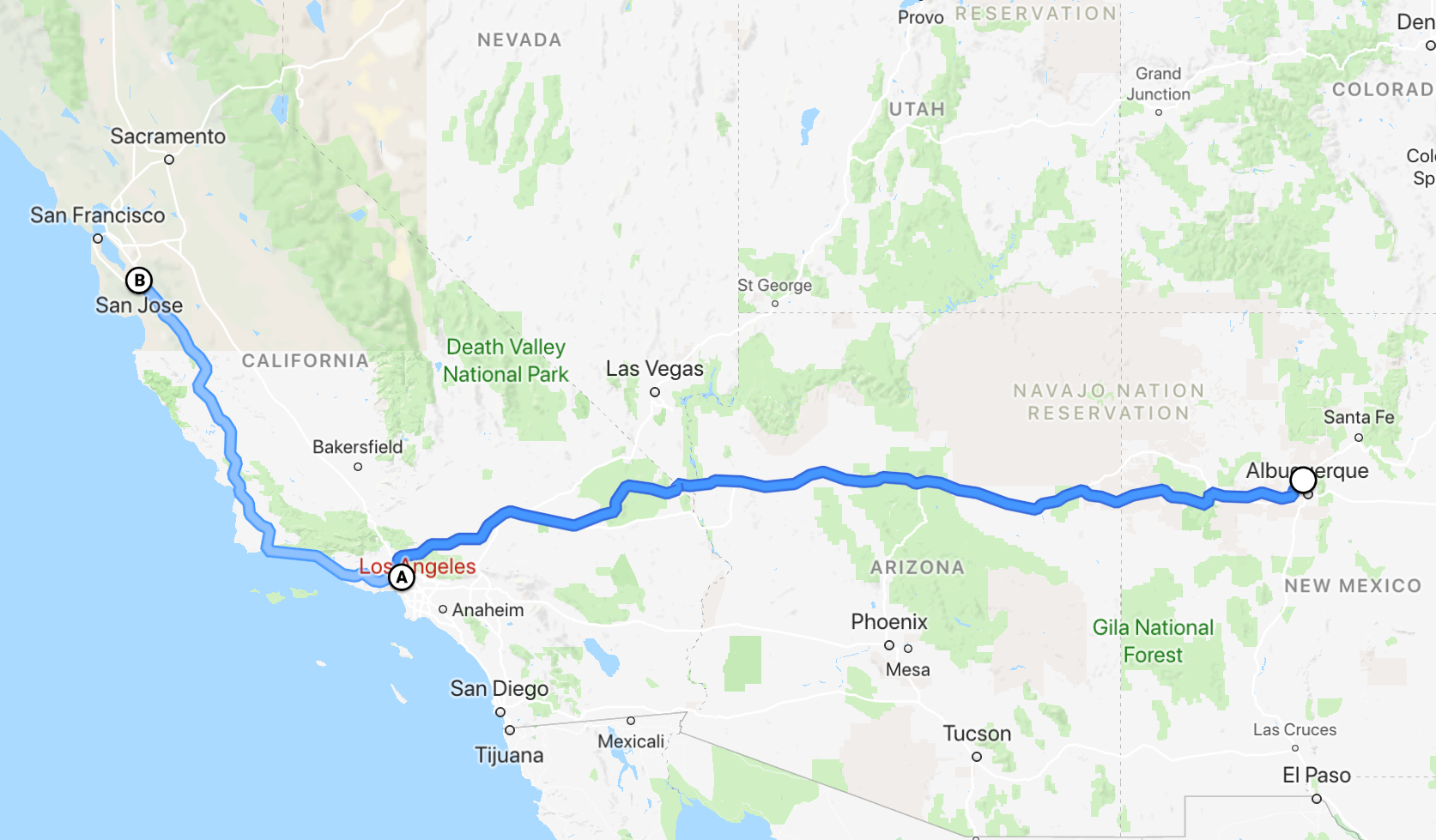 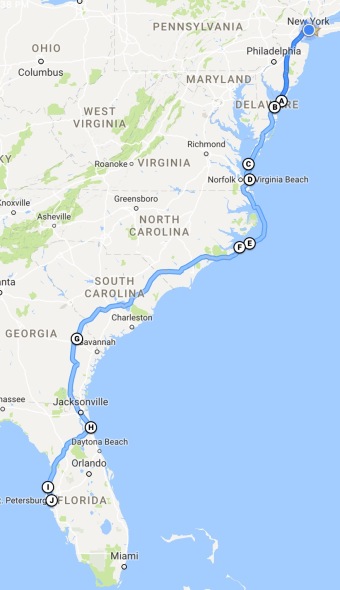 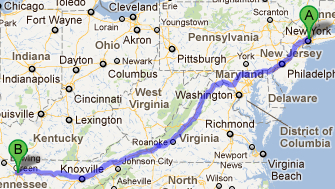 Thanks for dropping by! Take a look around. See a bit of the American heartland. Ponder some ideas about justice and ethics. Learn a little of the truth about immigration and political asylum.