We’ve pedaled 525 miles.  We should be in Corvallis, Montana.

The pandemic kept us home.  So we rolled up Riverside Drive to see with new eyes some NYC monuments. 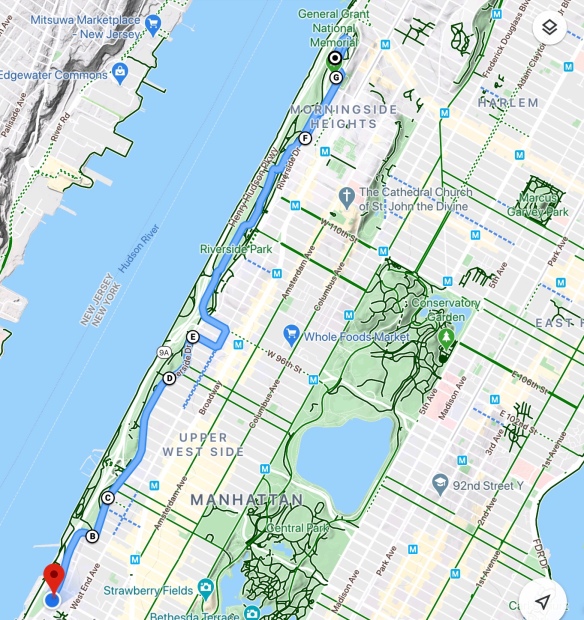 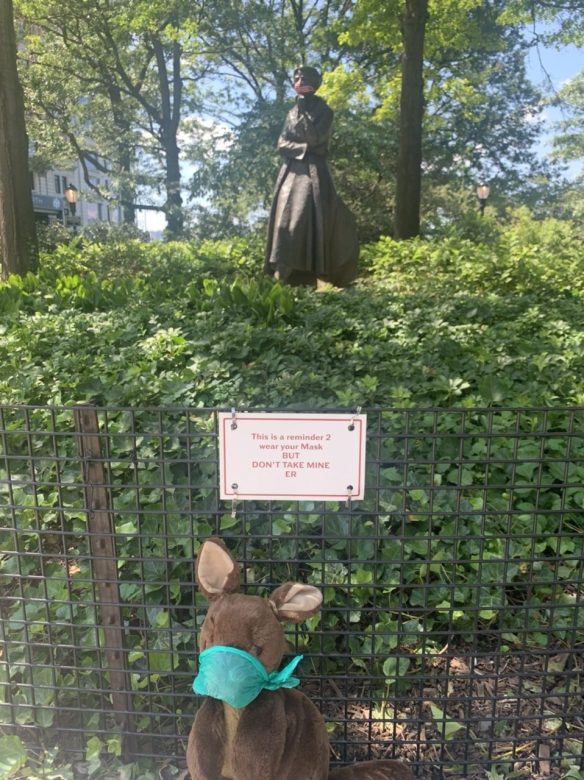 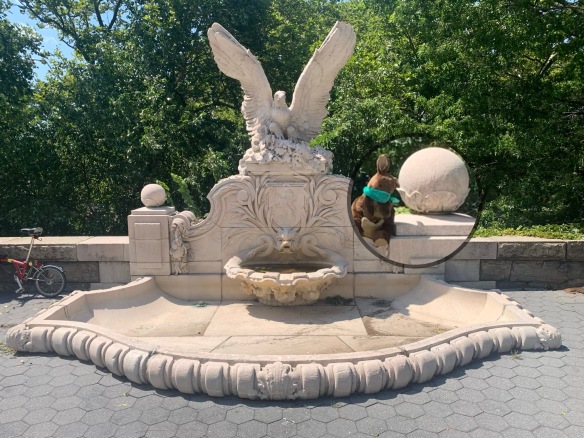 This 1906 horse trough was built with a bequest from Alexander Hamilton’s great-grandson, Robert Ray Hamilton (1851-1890). Note the bike for scale. (Joey appears enlarged.)

Friendly Murray doffed his mask for the photo. He’s an avid cyclist. We talked of his hippie days and of human rights. 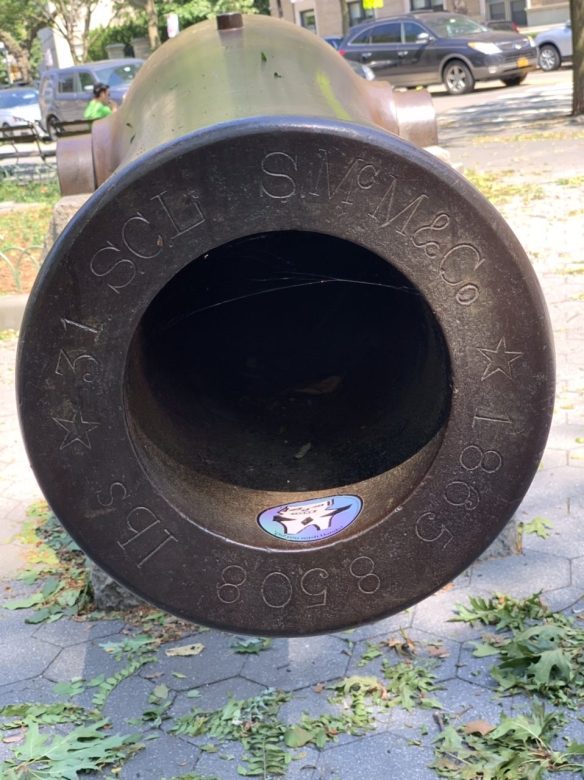 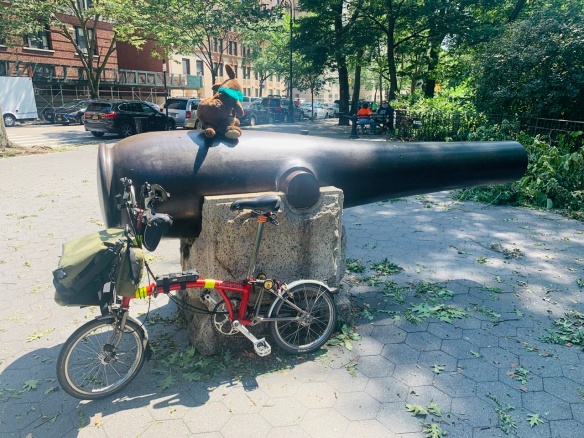 The 1902 monument to Americans who put down the 1861-65 pro-slavery rebellion awaits restoration. 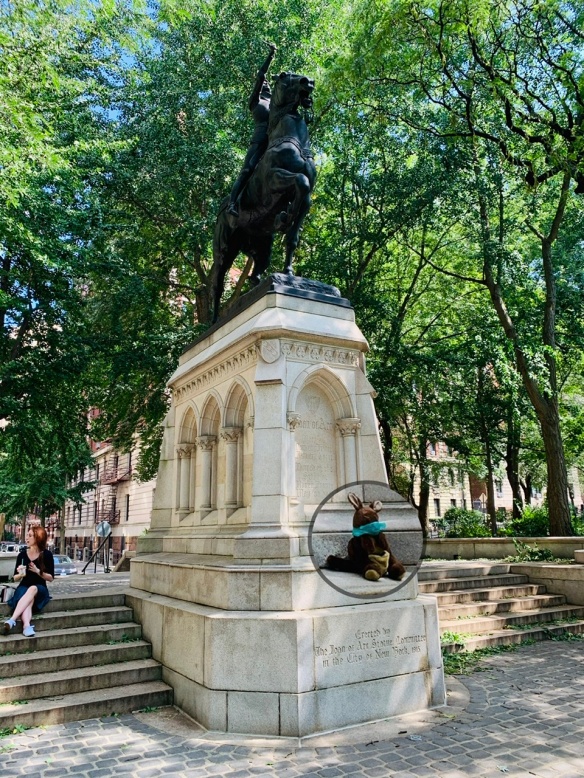 This 1910 drinking fountain was commissioned by women who promoted public health. 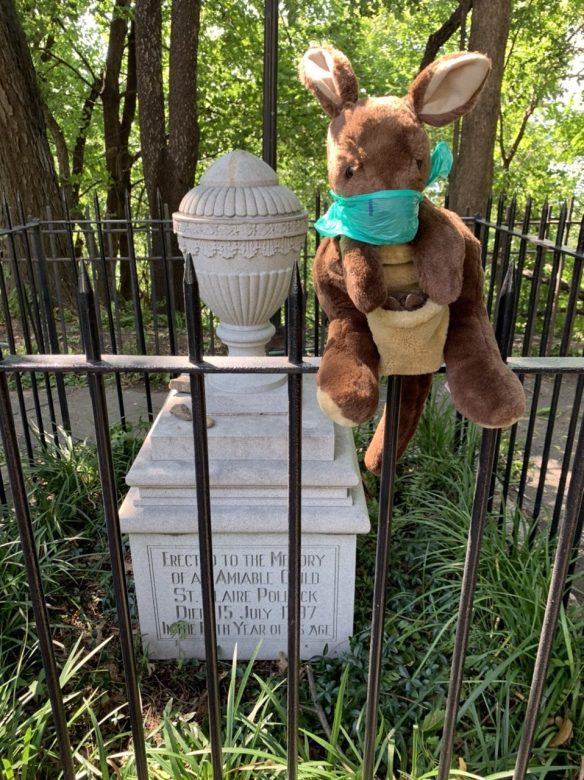 This monument is near the edge of a cliff from which amiable little St. Claire Pollock is thought to have fallen in 1797.

People who knew Eleanor Roosevelt (1884-1962) still live.  People who could remember the other subjects of these monuments are long dead.  Thus those monuments evoke stories and thoughts, not actual memories.

Much of what these people did, and we do, is out of habit.

Here’s a bit of the poster for Blazing Saddles, Mel Brooks’s raucous 1974 sendup of Hollywood and of more ethnic groups than you could shake a stick at.

Brooks mocks Westerns in a pretend First Nations headdress, labeled in pretend Hebrew that is equivalent to “Posher for Kassover”.

First Nations people and Jewish people share more than being the butt of affectionate Brooksian jokes.  They share ethics.

A Navajo tradition holds that conscience is a triangle with sharp points, lodged near the heart.  The triangle spins when you do wrong—ouch!  Spin it often, the points wear off, and the conscience spins without effect.

Interpreting the Bible, a Jewish sage said that when a person repeatedly does evil, evil becomes habitual and begins to seem virtuous.

These teachings agree that we must be careful of what habits we form.

As the world shrinks, its seamless web binds tighter.  Climate change, violence, need, in any place, increasingly affect every place.

Desperate people flee from worse toward better.  As would you and I.

By the numbers, America is not the best country for freedom, health, safety, opportunity.

America is good nonetheless.  And unlike most countries, America doesn’t belong to a religion or ethnicity.  It belongs to its inhabitants.  Support the Constitution and you are 100% American.

For our first century, America was open to all.  For the next 80 years or so, we imposed racist immigration restrictions.  Then, through the half century that began in 1965, we came closer to keeping the Founders’ 1776 promise of equality and rights for everyone in our community.

Lately Americans have resumed a bad habit.  Having forgotten the lessons of genocide, and despite the Refugee Act of 1980, Americans once again are turning away persecuted people who ask for protection.

Recently Jeffrey and I wrote of how our government effectively has banned asylum.

It’s getting worse.  Our government’s latest:

If an applicant is alleged by a non-medical official to be ill with any disease DHS or DOJ label a “threat”; is unable to pay a $50 filing fee; or leaves any line blank on an official form (even when a question was answered elsewhere on the form or doesn’t apply); the asylum application will be rejected.

What’s more, the annual cap on “refugees”—persecuted people who are vetted abroad for years before they are allowed to come to America—was reduced from 110,000 in FY 2016, to only 18,000 in FY 2020.  As a proportion of our population, the current limit is equivalent to 5 people showing up at the 102,780-seat Ohio State football stadium.

America’s humanity is being tested.  We are failing.  That failure is becoming a habit.

The tests will grow harder.  More refugees will seek safety here, even as we get used to the idea of rejecting more and more.

We can’t take all.

We can take some.

Will we take any?

We won’t if we submit to this bad habit.

We will if we break the habit.

We will if Navajo tradition, the Bible, our laws, our consciences, and Human Rights First prevail.

Let’s resume our former good habits and be true to our American ideals.

1 thought on “Evil Can Be Habit-Forming”