Joey here.  We hopped 81 miles to Brillion, set among Wisconsin farms and fields.  En route, we found only paved roads (in Michigan, many roads are unpaved), passed through beautiful countryside, and looked out over Green Bay.  It’s hard to grasp that after days and days and hundreds of miles, we still are following the Lake Michigan shore.  Are these Great Lakes or what? 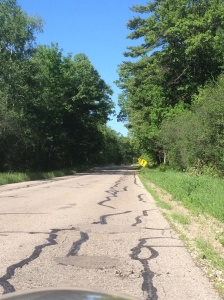 Today we offer a tribute to the kind common sense of plain American people.

This morning at breakfast, Jeffrey sat in the presence of a television tuned to something called “Fox and Friends”.  Evidently there is an all-powerful wizard named Obama who is responsible for every evil in the world.  Various announcers and “experts” caught Jeffrey’s attention by blaming Obama for a recent increase in the number of unaccompanied visa-less children entering the United States from Latin American countries.  Knowledgeable, reasonable people say the surge is due to crime, violence, poverty and corruption south of the U.S. border.  If it is due to Obama’s supposed lax enforcement of immigration law (despite Obama’s expulsion of unauthorized immigrants at a record pace), then why have asylum applications also spiked in Mexico, Panama, Nicaragua, Costa Rica and Belize?

Jeffrey saw people come into the room for breakfast and focus, as if in a trance, on the TV screen.  They seemed to be absorbing this shallow propganda.  It’s unlikely that they could put the “Fox and Friends” allegations into perspective.  What do people in small-town Wisconsin know or care about the terrible conditions causing children to flee large parts of Latin America?

But get away from the Talking Heads of Television, go directly to the people, and be reassured.

Outside, we met Jeff and Andrea, on their way home to Flint, Michigan.  Jeffrey and Jeff talked trikes and human rights.  The couple were friendly, intrigued, and promised to follow us on line.  No xenophobia, no Obama-bashing, just interest and warmth. 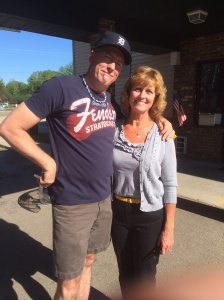 Later, in the city of Green Bay, Jeffrey ignored calls of “hey, you!” and the like, until he heard, “hey, you idiot!”  At that he looked up and saw the bridgemaster motioning him to get off a drawbridge so the bridge could open to admit a freighter from Wilmington, Delaware, that traveled here via the Great Lakes.

See the car that ran through the bridge barrier?  Looks like more than one idiot was on the bridge today!  The driver turned around and waited until the bridgemaster raised the barrier and let the driver escape.

Here are two people who were on the bridge, who are not idiots.  Alex is an IT professional.  Steph has degrees in music and Spanish and teaches Spanish to elementary schoolkids.  They shook their heads at the injustice of expecting asylum applicants to present their cases without a lawyer; Alex, an English-speaking American, has been in court and even he found it bewildering.  These thoughtful young people promised to follow the Ride.

Tom is one of a group of Harley motorcycle riders who called out to Jeffrey to ask whether we really pedaled from NYC.  He and the others asked a lot of friendly questions; when the others left, Tom hung back a moment and asked Jeffrey whether he would accept a donation.  Jeffrey invited Tom to donate on the Web, but Tom said he wanted to keep things simple, to “pay it forward,” and handed Jeffrey a significant sum in cash.  Now, some coastal “intellectuals” might not believe that a young Harley biker in the Heartland, where “Fox and Friends” plays in motel breakfast rooms, would so readily support Human Rights First moments after being introduced to the organization and its mission.  But Tom did.  Later, he and the others roared past us on the road and gave us a biker salute.  We have new friends.

Green Bay city and environs have some seedy bits, but much of it was pretty. 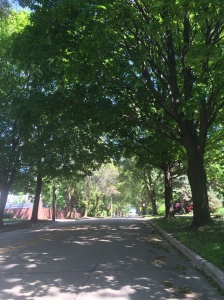 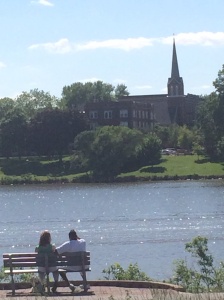 Green Bay has some immigrants, too.  Meet Pietro, from Genoa, Italy.

Pietro is an engineer who works for a shipbuilding firm.  His current project is to integrate the cultures of the firm’s American and Italian operations.  Pietro was biking to build up his legs for next winter’s ski season.  He seems happy in Green Bay, if a bit bemused by the locals’ worship of the Packers football team.

No wonder Pietro feels comfortable here.  You don’t have to dig deep to find Americans’ kindness and common sense.  Federal authorities have been shamed into starting a project to provide legal counsel to a small fraction of the unaccompanied minors who reach our borders.  If they followed the will of the People, as indicated by our unscientific encounters with ordinary Americans, Congress would provide counsel for every indigent asylum applicant, for every poor person facing removal from the U.S.

People in the Heartland who have hearts – which seems to be almost everyone – know it’s cruel to expect someone to face a life-or-death tribunal, alone.