Today we pedaled 67 miles to Michigan’s Upper Peninsula, passing the thousand mile mark for this year’s Ride.  We don’t count the 5 miles we were driven across the Mackinac Bridge.  More on that later.

We started out in a fierce tailwind, that became a side wind, that became a headwind.  We encountered several cold rain squalls.  Jeffrey enjoys it when the weather cooperates, buckles down and works harder when it doesn’t.  I sit it out in my plastic bag.

These “welcomes” illustrate some local interests . . . including beer. 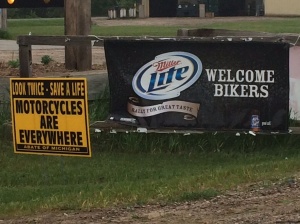 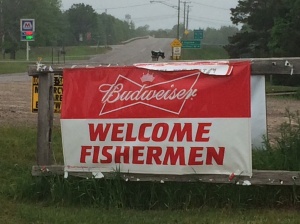 The road, mostly flat, passed through beautiful country.  Jeffrey loves birches.  Beautiful and useful trees, they remind him of his childhood home.

The tiny town didn’t live up to its fierce billing. 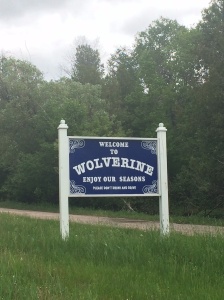 Meet Carol.  She grew up in Southern California and loved it there.  But she fell in love with a man in the military who came from northern Michigan.  She proves what social research has shown:  What you do, and with whom you do it, matters more than where you do it.  (Look at how country boy Jeffrey now thrives with Nancy in Manhattan!)  Carol has come to love northern Michigan’s four seasons and quiet life, so long as she gets a dose of the city once in a while.

Carol, an insurance professional, recognizes the injustice of expecting poor refugees to present asylum cases without lawyers.  She will follow our progress and wished us well.  Like Barb, whom we met yesterday, she thinks she heard mention of us on TV!

In Indian River, we were intrigued by the signs for the World Headquarters of Chillermania – and by the skeletons.

Jeffrey entered “at his own risk” and inside found Amy, a professional schoolteacher and avid long-distance hiker who introduced Jeffrey to the works of author Jonathan Rand, who writes deliciously scary stories for the fourth-grade set.  Jeffrey tried to buy a book; Amy insisted that he take it as a gift, and offered us a place to stay if we needed one.

It’s no surprise that this kind and educated person was aghast at learning that the U.S. does not ensure that asylum applicants have legal counsel, leaving that important task to the whims of individual lawyers and the limited resources of private organizations like Human Rights First.

We pedaled on.  Past Mullett Lake.  Past an oddly named Michigan state park.  Past a Big Boy statue, which to Jeffrey is a symbol of the Heartland. 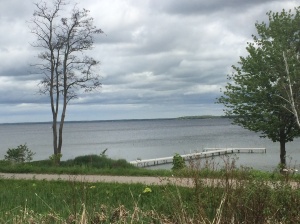 At last we came to Mackinaw City.  Jeffrey phoned the Mackinac Bridge Authority and Tim was dispatched to drive us and our trike across the Straits of Mackinac, between Lake Huron and Lake Michigan, to the Upper Peninsula.  Tim had the usual reaction – shock! – when he learned that the U.S. does not provide lawyers for asylum applicants.  We’re pleased that he’ll follow the Ride, and grateful for his warning about record numbers of North Woods mosquitoes. 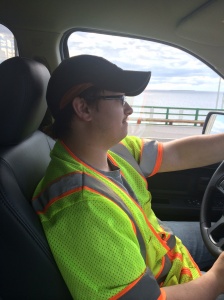 Thus we arrived at the shore of Lake Michigan, the fourth largest fresh water lake in the world, slightly smaller in area than the State of West Virginia.  Note the Lake Michigan (west) side of the Mackinac Bridge over Jeffrey’s right shoulder.

Our hours on the road give us time to think.  Today was a holy day in Jeffrey’s religion.  Away from his community, he observed none of the traditions; he only thought about them.  But while mulling things over, he remembered that twenty-four years ago, on this same holiday, Jeffrey set aside his observance to rescue a client who illegally had been deported by U.S. immigration authorities to face execution abroad.  The experience taught Jeffrey lessons about government lawlessness, the grave responsibility of the asylum lawyer for his client, and that while self-deprivation is fine, ritual observance should not trump others’ needs.  Concern for human rights can never take a holiday.