At the request of our Webster hosts, Grace and Leo, we won’t share their photo.  But you can see them in your mind’s eye.  Just imagine generous, thoughtful people with wonderful children.

Before leaving Lake Ontario, Jeffrey took a photo from lake level.  And for those who like their sunsets pure – that is, without the distraction of a kangaroo puppet – here is a view of Lake Ontario last night.

Then we headed west, through downtown Rochester.  Jeffrey asked these police officers who is responsible for the classical music being played from this building through loudspeakers.  They had no idea, but agreed that the music is calming and nice.

After we left the city, we passed through a series of small towns, then long stretches of farms and fields.  Roads were rough – one stretch is being repaved, but the westbound repaving is not in time for us – and we faced terrific headwinds whipping across the flat open spaces, sometimes as part of thunderstorms.  Look at the flag! 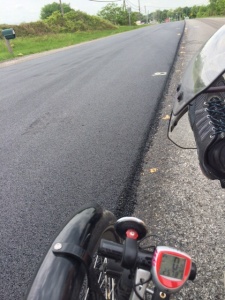 We paused in Churchville at Black Creek.  Jeffrey looked but did not see.  John, seated in his truck, opened Jeffrey’s eyes, pointing out a crane fishing by the dam, and fat carp trying to jump or climb the falling water.  Look carefully for the camouflaged crane, above and to the right of the center of the third photo.  Of course Jeffrey talked to John about Human Rights First.  We hope he follows our progress on line.

We greeted and talked to many other people: passers-by, drivers who rolled down their windows, people on porches and in shops.  We passed through many small towns – one with a name particularly odd for western New York – and saw a lot of cultivating equipment on the roads and in fields. 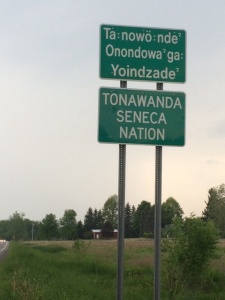 Upon crossing this national border – no passport required, no inspection available – we were greeted by First Nations caricatures advertising smoke shops, discount gasoline, tobacco, handicrafts, e-cigarettes . . .  One particularly offensive sign, not pictured here, featured a demeaning feminine silhouette wearing a feathered headdress in the style of the Western plains.  (Tonawanda land is far from the Western Plains.) 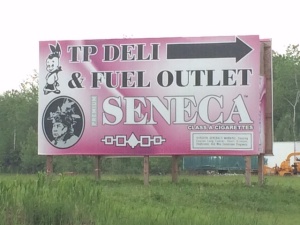 We do not judge.  Everyone has to make a living.

Yet we find the situation surreal.  Europeans came to North America, supplanted the people they found here, and imposed rules that make selling poisonous tobacco products the best economic option for some of the descendants of the aboriginal inhabitants.

The legal and cultural heirs of those Europeans now impose rules regarding who can live within the boundaries of what we call the United States.  The aboriginals had no say in 1492 or 1776.  Their descendants have no say now.

It makes one question by what right our government imposes itself on people who happen to have been born outside our borders, who do not wish to supplant anyone, who merely wish to live and let live.

We slipped back across the border into non-Seneca territory.  Cold, wet, and just before dark, we reached Jeffrey’s cousin Zena, her spouse Ed, and their haven in Williamsville. 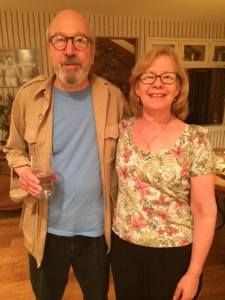 Now fed, warmed, and soothed by their fine company, we are ready to attempt to cross another border tomorrow, a border said to be peaceful and unfortified, but which in fact is staffed with inquisitors whose word is law and who are backed by force of arms.

4 thoughts on “We Cross the Frontier”